Delivering Exceptional Self-Service is No Longer an Option

Self-Care is Now A Must-Have for Subscriber Loyalty

Over the past two decades, carriers have tried to save customer care costs by encouraging subscribers to use online self-service. They have ramped up their online portals and dangled incentives for subscribers to click instead of call.

More recently, they have added mobile self-service solutions, with the hope that care-on-the-go will further replace customer care calls.

But the stakes for implementing exceptional self-service are much higher now than in past years. That’s because self-service is not only about shaving expensive call center costs. It’s also a critical component for keeping customers and gaining their loyalty.

writes Micah Solomon in a blog for Forbes.


The costs of poor self-service

Poorly executed self-service has big costs. Not only can it disenchant subscribers, but it can ratchet up bigger and more expensive problems for the carrier. For example, if subscribers don’t get what they need online, they can:

Call the call center. This means the carrier has essentially paid twice. They have incurred costs for deploying and optimizing self-service, and are also paying for a call.

Complain on Social Media. This has both real costs – paying a care rep to respond – and intangible costs. Every negative tweet or Facebook post can potentially discourage potential buyers from the carrier and sew doubt in existing ones.

Complaint email/tweet to the CEO: While many customers feel welcome to complain directly to the CEO – after all, he or she is tweeting all day too – that email or tweet comes with a big price tag. In most cases, the CEO passes it to his/her top lieutenants, who have to drop whatever strategy they are developing, and instead hunt down a rep that can address the issue. The result: instead of lower-level reps solving the problem for $15 an hour, the cost is closer to $120 an hour, per exec involved.

In addition to avoiding those costs, carriers are also incented to deploy rock star self-service because of so-called “digital parity”.

Consumers in today’s world expect to do everything on their mobile phones, from changing the heat in their house to finding out what’s in their refrigerator.

So logic holds that they should be able to do simple transactions, like pay their bill, as well as more complicated ones, like troubleshoot the connectivity problems with their connected car.

“Customers today expect every business in every industry to achieve ‘digital parity. In other words, your business needs to be able to offer all the advantages, and be as easy to do business with, as the best of what your customer has encountered online and in self-service solutions.”

Creating a smart, robust self-service solution online and via mobile requires both dedication and easy-to-change software.

Carriers must constantly add new functionality – and intelligence – to proactively anticipate customers’ questions. For example, they can put rules and functionality in place to understand if a subscriber is unhappy about the bill because he is looking at previous bills and rate plans. 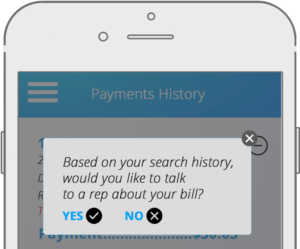 They also must optimize continuously. This can include:

As Solomon points out, “Self-service is always a work in progress.”

But making software updates – or comprehensive changes – isn’t quick or easy when the CSP has a monolithic business and operational support system (BSS/OSS) stack.

Change the back-end to improve the front-end experience

To increase agility, operators should consider implementing a decoupled back-end system using individual applications to address specific responsibilities (manage inventory, maintain product information, etc.). The applications can then interact with each other using open, standard APIs. They also can be modified and enhanced independently to improve the front-end experience.

Applications built with low-code technology can be launched and expanded more quickly than those built using traditional software strategies. That’s because low-code uses little to no custom code. Developers visually design or configure the software, not code it. Then these visual models work with the underlying low-code platform to generate the code and construct the software stack.

That’s important for self-service, which requires constant fine-tuning. Portals, processes and the user experience has to be optimized regularly to meet ever-changing customer expectations. If not, there’s a big price to pay.

“Here’s the dirty little secret: Badly implemented self-service costs the organization more — not just in money but in the negative impacts of poor customer experiences. Poor self-service is a lose-lose situation for everyone ”,

See how Our Technology Works

We use cookies on our website to give you the most relevant experience by remembering your preferences and repeat visits. By clicking “Accept”, you consent to the use of ALL the cookies.
Do not sell my personal information.
Cookie SettingsAccept
Manage consent

This website uses cookies to improve your experience while you navigate through the website. Out of these, the cookies that are categorized as necessary are stored on your browser as they are essential for the working of basic functionalities of the website. We also use third-party cookies that help us analyze and understand how you use this website. These cookies will be stored in your browser only with your consent. You also have the option to opt-out of these cookies. But opting out of some of these cookies may affect your browsing experience.
Necessary Always Enabled
Necessary cookies are absolutely essential for the website to function properly. These cookies ensure basic functionalities and security features of the website, anonymously.
Functional
Functional cookies help to perform certain functionalities like sharing the content of the website on social media platforms, collect feedbacks, and other third-party features.
Performance
Performance cookies are used to understand and analyze the key performance indexes of the website which helps in delivering a better user experience for the visitors.
Analytics
Analytical cookies are used to understand how visitors interact with the website. These cookies help provide information on metrics the number of visitors, bounce rate, traffic source, etc.
Advertisement
Advertisement cookies are used to provide visitors with relevant ads and marketing campaigns. These cookies track visitors across websites and collect information to provide customized ads.
Others
Other uncategorized cookies are those that are being analyzed and have not been classified into a category as yet.
SAVE & ACCEPT
Powered by